Many exhibitors at K 2022 have had a challenging year, with high material prices, supply chain issues and the continued recovery from the global pandemic among the hit list.

Then there's PET Technologies Ltd., a blow molding machinery producer exhibiting at K 2022. Its biggest challenge comes from where it is based: Ukraine.

"You have seen the news and all that is happening around us," CEO Maxim Poliansky said in an interview at a booth tucked into a small corner of Hall 14. "The most important thing for us is purely to survive, not only as a company but as a country. It is what we have to do."

PET Technologies is Ukraine's largest blow molding machinery and blow mold supplier and has served the surrounding region, including Russia, since its founding in 1999. The company is based in Chernihiv, Ukraine, dangerously positioned in the north of the country, less than 45 miles from the Russian border.

Before Russia invaded the country in February 2022, PET Technologies employed 240 people at its 10,000-square-foot plant. Then the bombing began near its factory. While the plant was miraculously unscathed in the constant air attacks, the area around it was in places reduced to ashes and some buildings became damaged shells.

The company had a decision to make, Poliansky said. Many of its fellow businesses were relocating out of Ukraine, moving to the western part of the country, where bombing was not as fierce, or closing entirely. PET Technologies briefly considered moving to a safer haven, but it decided to stay put.

The decision was as much about taking a symbolic stand against terror as it was in continuing production and maintaining consistency, he said. 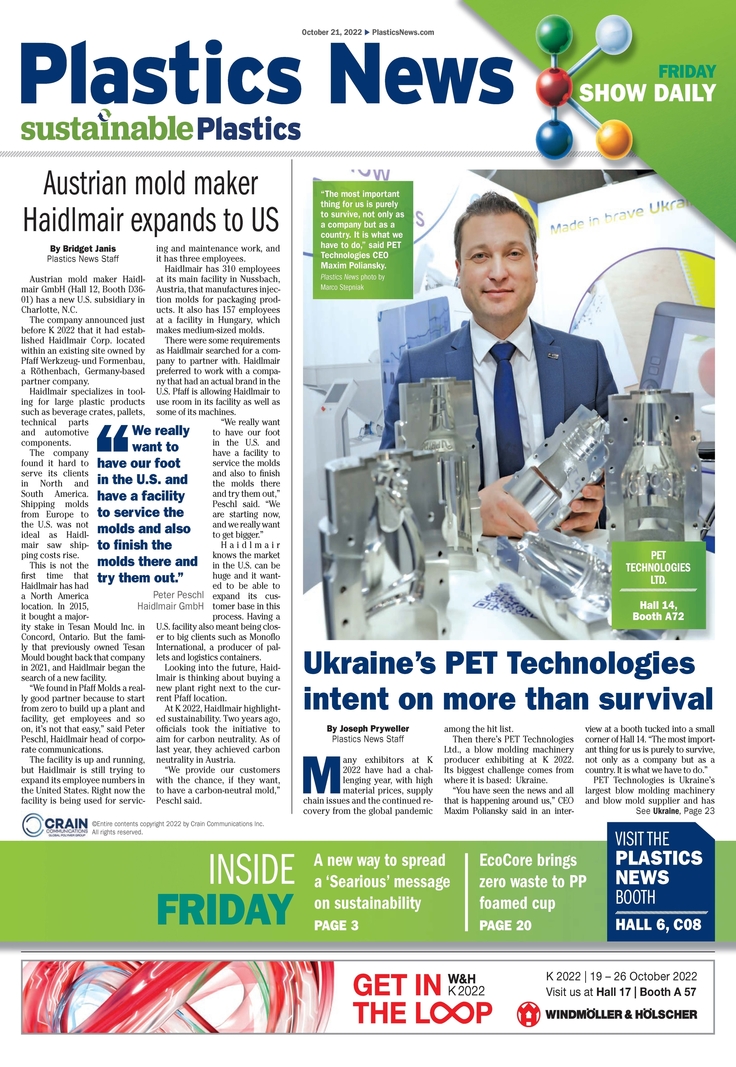 Plastics News will be putting out trade show dailies at K 2022. We'll also be on hand for all of the breaking news and press conferences at K. Be sure to sign up for our special K newsletters so you don't miss a thing.

PN, and our sister publication Sustainable Plastics, will be at Hall 6, Booth C08, where you can pick up a copy of our show dailies.

Check out our live blog of the show here.

"We decided to be part of rebuilding the local area and pay our taxes to support the government and its fight," Poliansky said. "It was difficult but not impossible to do that. We saw the worst of it and survived through it. Spring was taxing, and we lost a good part of our business. Now, we are intent on not only surviving but growing."

The company decided to explore new markets to replace some of the 30 percent of its business that was sent to Ukrainian processors before the war. With many of those businesses in lockdown or closed, it was a must to focus on global work, Poliansky said.

The company had one advantage: For the last seven years: it had already made inroads into the Americas, both North and South, and in central Asia. It had supplied machinery and molds to 55 countries, growing its overseas business considerably. Both 2020 and 2021 had been extremely good years, Poliansky said.

Another hurdle was showing the world that PET Technologies was surviving and even thriving as a company. A decision was made to invest in booths at both Drinktec, a large packaging show that was held in Munich in September, and at K 2022.

The company needed to make an impression, Poliansky said. The reasoning was simple: The war with Russia had damaged the reputation of Ukrainian companies as strong business partners, and customers were worried about the ability of PET Technologies to supply machinery and molds, he said.

"Not so many wanted to invest in Ukraine," he said. "We had to tell people that we were still here and could fill their needs."

PET Technologies became a story of resilience. The plant is inching back closer to capacity. Of the 240 workers who were at the company before the war, about 200 were rehired, he said. The others either left the country or joined the military in the fight against Russia.

Now, the company is finding both new customers and returning customers, Poliansky said. Inside Ukraine, the company had supplied machines to processors producing vegetable oil. Poliansky added that Ukraine was the biggest global exporter of vegetable oil before the war and that supply is coming back.

Outside the country, the company is gaining momentum. It sold three machines to customers in the United States this summer, and two more were shipped to companies in Asia, he said.

The company is supporting applications in dairy and juice bottles and in beer and is working with customers in the use of recycled PET. Its machines, like others from blow molding equipment suppliers, are more energy efficient and able to cut down on kilowatt hours.

Someday soon, Poliansky hopes the war will be over or that it will have less effect. In the region where PET Technologies works, air attacks have already subsided and the community is rebuilding. But there continues to be some concern about what the future will hold and whether the company can stay in its current location for the longer term.

"There is no other choice but to keep working," he said. For PET Technologies, each day it can produce machines and parts is a good one, he added.