Biting a hole in polyethylene bag

Remember the plastic-eating wax moth caterpillars? In 2017, the discovery that a certain type of moth caterpillar  - the Galleria melonella – appeared to be able to eat polyethylene and thrive, created a stir in the news. Would caterpillars provide a CO2-neutral solution to the mounting plastic waste problem around the world?

Last year, a new study appeared whose findings seemed to support the idea. That study found that larvae of the wax moth could happily consume an amazing amount of polyethylene seemingly with no adverse effects. 100,000 caterpillars, reported the study, could eat around 5.2 kilograms of PE is a week, opening up new possibilities for the disposal and elimination of plastic waste.

A German team of researchers at the Fraunhofer Institute for Structural Durability and System Reliability LBF in Darmstadt decided that it was time for a thorough investigation. As the researchers said, before this ‘remarkable ability of the caterpillar can be harnessed technologically, it must be clarified whether it actually digests the PE or merely crushes and excretes it’.

The team set up a research project which they called RauPE, aimed at gaining a full picture of the plastic digestive process in the caterpillars, using chemical imaging analysis.

With the help of high-resolution Raman microscopy and dedicated software, these researchers tracked the progress of the plastic through the larvae, hoping to thus find an answer to this question.

With the help of machine learning, the software, developed by the team and written in the programming language Python, was able to separate the superimposed Raman spectra of the components, providing the spectra of the individual components on the one hand and their local concentration on the other. As a result, the researchers could detect even low concentrations of PE in a complex mixture.

Another benefit of this approach was that the larvae could be studied ‘non-destructively’.

The results to date have been startling: according to the project team, the caterpillars eat holes in  PE foil, taking in small amounts and losing considerable body mass in the process.

However, having nibbled through the material, the larvae then stop eating. 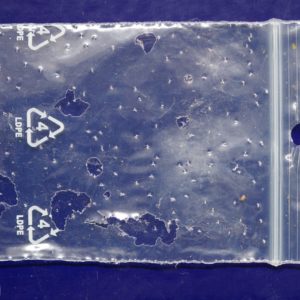 No evidence has been found based on the analytical measurement data that the caterpillars actually digest the polyethylene.

“The fact that caterpillars biodegrade polyethylene remains a visionary goal for the time being, and intensive interdisciplinary efforts are essential to achieve it. For scientific research, it is therefore all the more important to avoid and recycle plastic waste, taking into account all stages along the packaging value chain,” said Dr. Bastian Barton, who supervised the research project at Fraunhofer LBF.

The bottom line? There is an urgent need for improved concepts and suitable technologies for the production of post-consumer plastics with high quality and constant availability. Only then will it be possible to reuse plastics already in use on a large scale and for a wide range of products, Barton concluded.

The LBF researchers have also documented the RauPE research project in a video.