Ocean plastics: we need prevention more than a cure

'Once in the oceans, it's almost impossible to clean up' says Tomra's Kristine Berg

When circular economy advisor Kristine Berg sailed with eXXpedition on a voyage across the North Pacific, she saw first-hand what the Great Pacific Garbage Patch looked like.

“Washing baskets, toilet seats, lawn chairs and much more,” she said. “It’s out there for decades, so it’s breaking down and becoming more like a plastic soup than the island of plastic that many people imagine. How in the world do you clean that up in any kind of efficient way? In time or money?”

The experience was an amazing one, said Kristine, who works at Tomra, the Norwegian company specialised in recycling and sensor-based sorting systems, offering a unique opportunity to connect with the ocean.  “When we sailed across the North Pacific the closest people to us were the International Space Station…so it’s like going to the moon in many ways as well,” she said.

The voyage was organized by eXXpedition, a not-for-profit organisation founded in 2014 that runs pioneering all-female sailing research expeditions all over the world to investigate ocean plastic pollution. There are 14 women on each voyage, forming a multidisciplinary collaborative crew that aims to gain a better understanding of the plastics issue as a whole by conducting research to address knowledge gaps in pursuit of effective solutions to the plastics crisis.

It was an exciting moment for Tomra, too, when Kristine told her employer that she had been accepted to join the eXXpedition voyage. The company has traditionally been technology-driven and industry-focused, but for the past few years has transitioned into taking on a bigger role also in educating and engaging consumers on how to be part of the solving plastic pollution. Tomra produces land-based solutions to ocean plastics, such as reverse vending machines, and involving consumers on the positive impacts of returning their containers important for the success of deposit return systems. The company was looking for ways to promote consumer awareness of the need for recycling and to encourage people to return their plastic bottles and containers, so they do not end up washing into waterways and into the ocean.

This voyage provided exactly what the company was looking for: a chance to dive into the problem of ocean plastic to discover what is out there and where is it coming from.

Kristine: “And it just grew into this wonderful partnership - Tomra came aboard as a sponsor, personally for my own participation and then of the overall voyage. It worked so well for both TOMRA and eXXpedition because we as a company could get more into the science and get more into that awareness building, and eXXpedition had an industry partner with one of the best preventative solutions out there on land: so it was a really good match.”

With her background in industrial ecology, Kristine is an ambassador for Tomra and for the circular 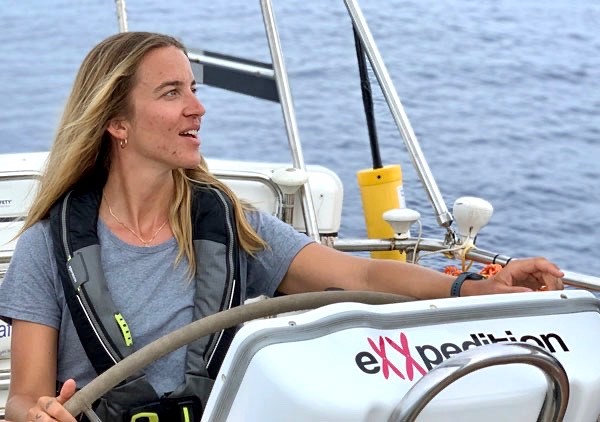 economy. Industrial ecology, she explains, is the science of the circular economy and a field of study developed in response to industry needs for understanding benefits and key enablers of circular economy in genera “In everything we do we should emulate nature, because we can’t really afford to have processes that produce a lot of waste that is just going to stay around and not have a value and use on the planet,” she said.

And having been out there, having seen the damage caused by ocean plastic, damage that has already happened and that is difficult to manage, she understands the importance of building awareness. The circular economy is one of the key solutions to ocean plastic, she emphasised. “Ocean plastic is almost the last frontier: it is where plastic ends up when we don’t treat it as material that has value. For Tomra, it was important to us to be part of that,” she said. It is what Tomra is striving for through the machines it builds and its technology, but the company is equally engaged in what Kristine calls ‘connecting the dots’ for recyclers. “To encourage and reinforce that positive behaviour and those habits that we know have an effect on bringing plastic material back into the closed loop,” she said.

In a bid to learn more, Tomra has partnered with researchers and organisations studying ocean plastic, and has also participated in various ocean plastic upcycling projects to understand more about the supply of ocean plastics – an aspect of interest to brand owners.

“If we were to integrate ocean plastics into  supply chains, what    does it look like, what can we expect? I have also worked in various other upcycling plastic recycling projects, which were not with ocean plastic. These are one step up the value chain: we still control the material somewhat – it hasn’t gone completely astray as it does with ocean plastics but it is a little further up, where you really maintain that quality and the value of the material. So for us it is really about learning in a lot of different ways – and integrating this knowledge back into our work and sharing it within the industry and with the public as much as we can,” she explained.

Is integrating ocean plastic into the supply chain a realistic option?

“I wouldn’t say integrating ocean plastic into value chains in a big way is a goal in itself or something we work towards, as it will be expensive and not the most efficient way to get at the problem. There are many things we can do that are a lot further up the value chain that will have a lot more impact,” Kristine said. “I really agree, ocean plastic is sexy. You’ve seen so many brands using ocean plastics – that still has a sort of social value to it.  And anyone trying to integrate it into production streams and make consumers aware of the benefit – it’s the right direction.” She added: “But once it’s out there, it is almost impossible to clean it up. We need to prevent it from entering the oceans in the first place. Once it’s got that far, we haven’t done our job in preserving the material. The things that we have to do – we really have to do on land.”

Communication is key At Tomra, the circular economy has been part of the language and ethos for decades. For this company, it has been a revelation to hear this language coming back from consumers, legislators and other industry partners.

“It’s really that awareness now – it’s showing itself in that language that is similar to ours,” said Kristine. The company has also gained learnings in other ways from its involvement with eXXpedition. Working with partners and customers, it can gauge the sustainability of projects – financially and environmentally in a different way. “We have a new baseline of learning about ocean plastic,” said Kristine. “And just trying to be an enabler has been an important learning as well. We can take a much bigger role as a company in enabling and sharing the knowledge that we have as material experts. It is something felt throughout the organisation - the industry in general is really hungry for knowledge like understanding how they can best be part of the solution.”

Ultimately, it all starts with communication - and education. Educating people, explaining to them that everything starts on land and it is often not a deliberate approach that makes it end up in the ocean, but the sum of many, many individual actions.

“There’s a lot of value in raising awareness so that people understand where it comes from, how it ends up there, and what we can we do about it. Essentially, the solution lies with all of us to do something about it.”